London, UK. New research by Ipsos shows that 21% Britons say they have worked at the weekends to make extra income in response to the rising cost of living.  People are also changing their spending habits at the weekend, with 45% of people saying they have reduced the amount they eat out or get takeaways, 42% travelling less and 41% socialising at home more, instead of going out to a café or pub.  Over a third (37%) of people say they have reduced the amount of paid-for activities they participate in, such as concerts, cinema and theatre visits, and the same proportion of people have been taking part in more free activities.

While Britons’ favourite part of the weekend is socialising with friends and family (14%), While nearly half of Britons (45%) associate the weekend with relaxation, in reality the most common thing people do over the two days is household tasks such as laundry and cleaning the house (38%). However, a third say they typically have a lie-in, spend time in green spaces or the garden, or socialise with their friends (all 33%)

Three in 10 (30%) say they spend their weekends catching up on their favourite TV shows, while a quarter spend time on hobbies. 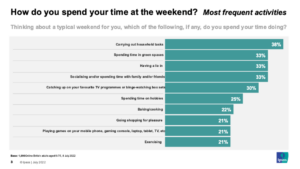 As above, Britons are most likely to associate their weekend with relaxation, with nearly half (45%) saying this comes to mind when they think of the weekend. Almost one in five (18%) associate it with socialising while 14% think of entertainment and having fun. Some harbour more negative feelings: seven per cent have negative associations with the weekend, while for another eight per cent of Britons one of their primary associations is having to do household chores.

The new research has been carried out in partnership with We Invented the Weekend, a brand new, large scale, bold, free festival, due to take place in Salford, the birthplace of the weekend, on 10th and 11th September.

The weekend was invented in Greater Manchester in 1843, when campaigners, including Salford based workers’ rights activist Robert Lowes, also Sir Ian McKellen’s great-great-granddad, won workers the right to leisure time on Saturday afternoons. In honour of that historic moment, this brand-new festival will celebrate the importance of leisure time, free time, quality time and me-time.

The festival, and Ipsos will be working with researchers from the University of Manchester before and during the festival to develop our understanding of how people experience the weekend, what they want from it, and its significance for culture and community.

Activities least likely to be done over the weekend are volunteering (3%) or attending a place of worship (5%). Around one in ten say they spend their weekends watching a live sports event (8%) or playing sports themselves (9%). Similarly, nine per cent say they attend a cultural event/place or work in paid employment during their typical weekend.