The Weekend Orchestra with the BBC Philharmonic – song and lyrics announced! 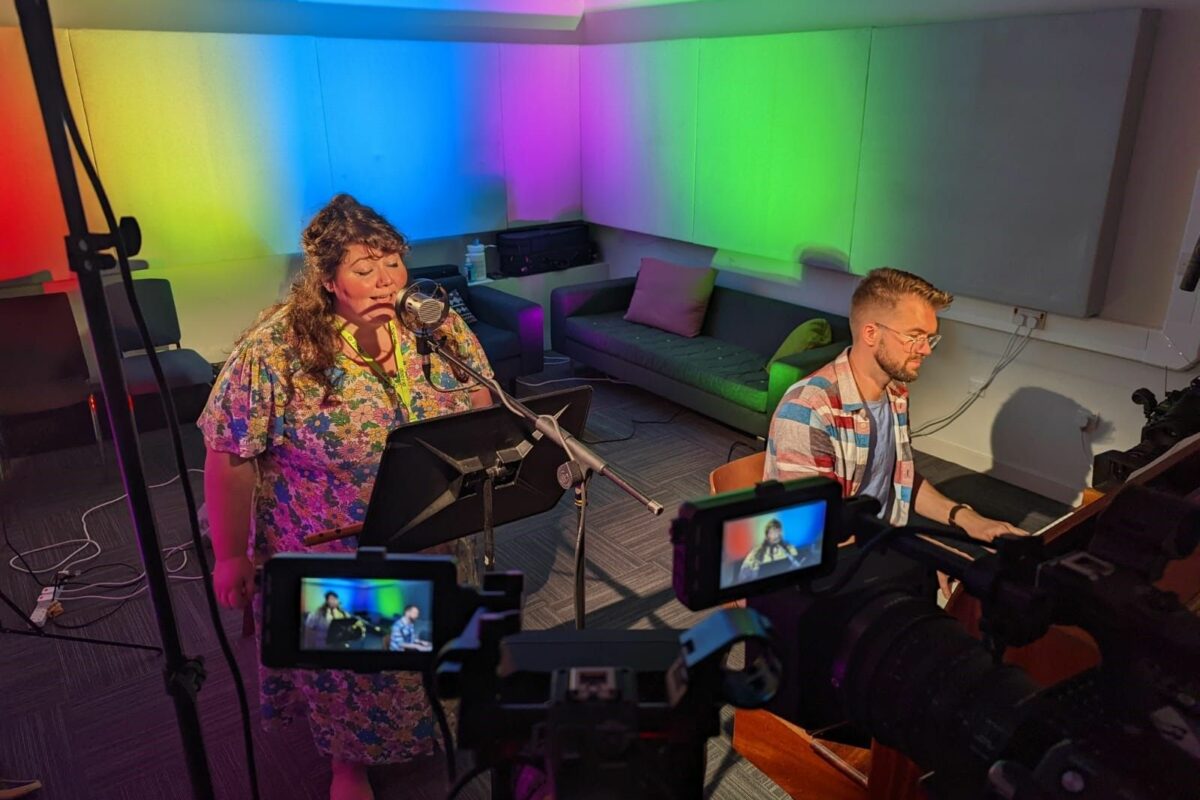 Thank you to everyone who has signed up so far to take part in The Weekend Orchestra with the BBC Philharmonic – a joyful musical celebration of the history of Salford Quays and MediaCity which invites singers and musicians of ALL levels to take part in a huge community performance at We Invented the Weekend on Saturday 10th and Sunday 11th September.

We are so excited to announce the song which will form part of the performance and has been created especially for the festival. The song is based on an original poem by Salfordian Poet, Lynn Walton called ‘The Big Ditch’ and celebrates the history of Salford Docks.

Composer and conductor Michael Betteridge (Artistic Director of The Sunday Boys – Manchester’s LBTQ+ low voice choir) has used Lynn’s words to create the music and lyrics for the song, ‘Unlocked by Salford Quays’ which has then been recorded by Michael (on piano) and Ríoghnach Connolly on vocals (Honeyfeet and The Breath, and BBC Folk Singer of the Year).

You can download the audio of the song here and the lyrics here to give you chance to practise in advance. But don’t worry too much if you don’t get chance as Ríoghnach will be at the festival to lead the vocals and Michael will conduct The Weekend Orchestra.

The first ballot has now closed but if you haven’t signed up already, don’t worry, there is still time to sign up to take part in The Weekend Orchestra as we have been able to release some additional spaces which will now be allocated on a first come, first served basis.

So, you might play the spoons or the sitar, a trumpet or a triangle. You could be part of a choir or just love belting out a tune in the shower. We want anyone who is enthusiastic and keen to be part of what will be a very special performance to get in touch and form part of The Weekend Orchestra – a mass community performance with all instruments and abilities welcome. The piece will be performed alongside the BBC Philharmonic in the MediaCity Piazza during the festival and will form one of key parts of the festival programme.

To apply to take part, please go to BBC Shows and Tours  and select whether you will be playing an instrument or singing and whether you’re available to take part in the Saturday or Sunday performance (or both).  All levels and instruments are welcome (not just traditional orchestral instruments, although they are of course required and welcome). Similarly, all singers welcome (individuals and choirs). And if you’re part of a choir or musical ensemble, please email philharmonic@bbc.co.uk to sign up your group.

To take part, you must be available to rehearse from 10am – 12pm on the day of the performance (Saturday 10th or Sunday 11th September) with the live performance taking place from 12.30 – 1pm. The performance will be recorded and may be broadcast.

We Invented the Weekend

We Invented the Weekend is a bold and imaginative free festival for the North, from Salford, taking place on Saturday 10th and Sunday 11th September 2022. This brand-new two-day event will throw open MediaCity and Salford Quays’ spaces and places, to celebrate the joy of free time, taking in sports, music, comedy, theatre, dance, workshops, talks, food, charity, wellness, crafts and more.

The weekend was invented in Greater Manchester 1843, when Salford Lyceum director and workers’ rights activist Robert Lowes (also Sir Ian McKellen’s Great Grandfather) campaigned to win workers the right to leisure time on Saturday afternoons. In this triumph, Greater Manchester gave an enormous gift to the world and We Invented the Weekend will honour this, in true style, celebrating leisure time, free time, quality time and me-time.

The festival is in partnership with the BBC, The Lowry, the University of Salford, the Royal Horticultural Society, Science and Industry Museum, The Open University Business School, HOST, Salford Community Leisure, Salford CVS, Sounds from the Other City and hundreds of community organisations from all regions of the city.

Large parts of the programme will be co-created with Salford’s and Greater Manchester’s communities, alongside content delivered by its internationally renowned culture producers, it will be a festival by the people, for the people, celebrating the region’s rich diversity.

We Invented the Weekend is a joint project between MediaCity, Salford City Council and HemingwayDesign, supported by funding from Arts Council England.